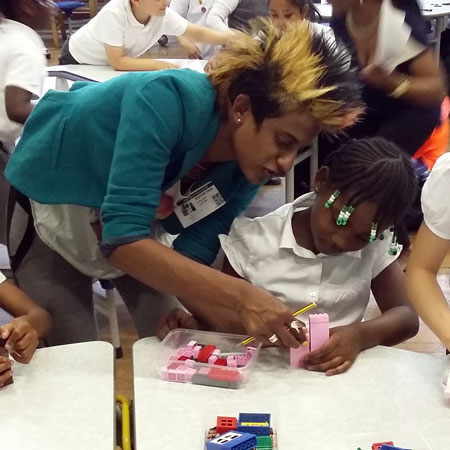 Children from Nightingale Primary School have been immersed in a variety of science activities from forensic investigation to a Fab Lab workshop where they programmed real robots. The activities were all part of ‘iDiscover’, a new initiative from Inspire!, designed to encourage the engineers and scientists of the future.

iDiscover, funded by The Mercers’ Company, Salesforce and The Royal Society of Chemistry, offers a week’s menu of science-related workshops and lesson plans, with different activities tailored for individual year groups. A diverse range of business volunteers working in the science, technology and engineering industries were key to delivering some of the events to bring a real world context to children’s science and technology learning.

Nightingale is the first primary school in Hackney to pilot the programme. Among the events were forensics workshops for nursery and reception children, followed up with a police visit to conclude ‘Who did it?’; a toy workshop with a mechanical engineer from Intertek (Year 1 and 2); designing computer games and programming robots at Fab Lab with the help of volunteers from Salesforce (Year 5); and curating a science exhibition to explain how we get ill (Year 6). Two ‘careers carousel’ sessions also afforded Years 1-4 the opportunity to meet and talk to people working in STEM (science, technology, engineering, mathematics) industries and to ‘have a go’ at some related activities.

At Fab Lab in the City of London, Year 5 students worked alongside volunteers from Salesforce, a cloud computing company, to programme ‘Mirobot’ robots to navigate a maze. The children really took to the activity setting themselves ever more complex challenges. “I’ve learned a lot about coding and the different jobs you can do in science,” said 10 year-old Rowan Kouakou, who was also reporting on the event for his school’s newsletter.

Salesforce actively encourages its employees to volunteer with six days a year available to employees to support community activities. Paul Gunn said he was drawn to the Inspire! event because he has two small children of his own and felt he could pass on some of his IT knowledge. “My group has really worked as a team,” he said: “They followed instructions and they got stuck in in an organised way. It’s been really good fun for me and a good introduction to robotics for them.”

Back at Nightingale School, Year 2 students met a range of volunteers from different industries, including architects, electrical engineers, a civil engineer, a mechanical engineer and a farming and plant consultant. The students constructed their own torches, made models out of Lego and discovered some of the challenges and solutions to growing food.

“I liked making a house out of Lego best,” said one of the pupils, while another enjoyed making a torch that worked.

Alice Kestell, Primary Programmes Manager at Inspire!, said: “iDiscover builds on the model of our popular Work Week programme for primary schools. It responds to the requirement from both our schools and the Government to promote STEM activities and encourage greater participation in science and technology subjects from students, especially those from black and minority ethnic backgrounds who are currently under-represented in these sectors. Science and technology will play a huge role in our future economic development, with jobs that probably haven’t even been invented yet, so if we can inspire pupils at an early age, who knows what they might go on to achieve?”