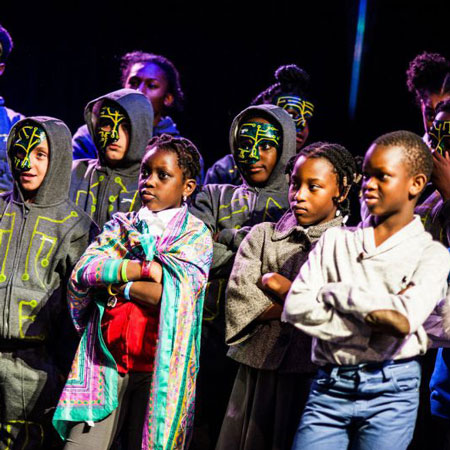 Following a week of hard work in rehearsals, Friday 28th August saw 19 primary school pupils put on a thrilling performance for families and friends at Hackney Empire 2. Supported by practitioners from the Hackney Empire Artist Development Programme – local young people (13-19) taking part in an intensive programme to develop their theatrical talent – the children performed an original piece of musical theatre that depicted the triumph of creativity over the monotony of rote learning.

The workshop and performance were part of our Families First programme, which helps selected Hackney children make a smooth transition from primary to secondary school. Working with children who have been identified by their primary schools as being in need of additional support, this year the project began working with Year 6 pupils in January, and will support them until August of 2016.

The children worked with Yamin Choudury, Hackney Empire’s Associate Producer for Creative Learning and Community, to develop his original concept for the spooky show. Featuring 6 original songs, the production was titled simply ‘IT’ and introduced the terrifying ‘zombits’ – brainwashed by technology and unable to think for themselves, the slaves of the dastardly IT teachers! No-one was immune to the hypnotic power of their demonic devices, with ‘parents’ (also played by the pupils!) proving equally vulnerable to their spell.

Three intrepid children led the fight against the tyrannical teachers, having escaped their minions’ clutches in a frantic pursuit through the woods. Ultimately, justice was done and good restored: the pupils saved the day through their bravery and creativity, rescuing their kidnapped headmaster and freeing the zombits from their enslavement.

The performance went so well, it was easy to forget that the pupils had only been working on the piece for 5 days: they learnt 6 songs, all accompanied by dance routines, and put on a fantastic show for their appreciative audience. Most pupils had never performed in public before the start of the week – by Friday afternoon, many were displaying serious star quality. ‘All of us at the Hackney Empire are incredibly proud of what the kids have been able to achieve in such a short amount of time,’ said Yamin Choudury. ‘Inspire!, as a company, is an amazing resource for young people in Hackney and we look forward to creating more exciting projects with them in the future.’

One of the key goals of the Families First programme is to boost pupils’ confidence and self-esteem, and activities such as this one, where students are supported to push their boundaries and try something new, help them to overcome social barriers and learn to make friends. It was clear from the students’ feedback that the theatre workshop achieved its aims – one said that ‘my favourite part of the week was making friends, meeting new people and learning different things.’

Inspire!’s Director, Jonny Boux, commented: ‘Inspire! was delighted to partner with Hackney Empire once more, and we were thrilled by the fantastic performance last Friday. The week was a great success and a fitting end to this part of the Families First programme. We know that transition periods in a young person’s journey through school can be challenging, and this project has really enabled young people to build their confidence over such an important time.’

Although extra funding has been secured to support the current group of pupils participating in the programme through to the end of their first year at secondary school, this marks the end of the Families First programme in its current format. While it has been a tremendous success for the young people involved, setting them up for happy and successful secondary school careers, it is not currently funded to work with new groups of pupils. We will therefore be seeking alternative funding routes to ensure that those local young people who need it continue to receive extra support to navigate this very stressful period of their young lives.

When asked about the programme, pupils were emphatic about the difference it had made to them. One young person told us ‘now I feel less nervous [about going to secondary school] and am actually quite excited’. With results like this, all that remains for us to do is to wish all participants on the Families First programme a happy and productive first term at secondary school!